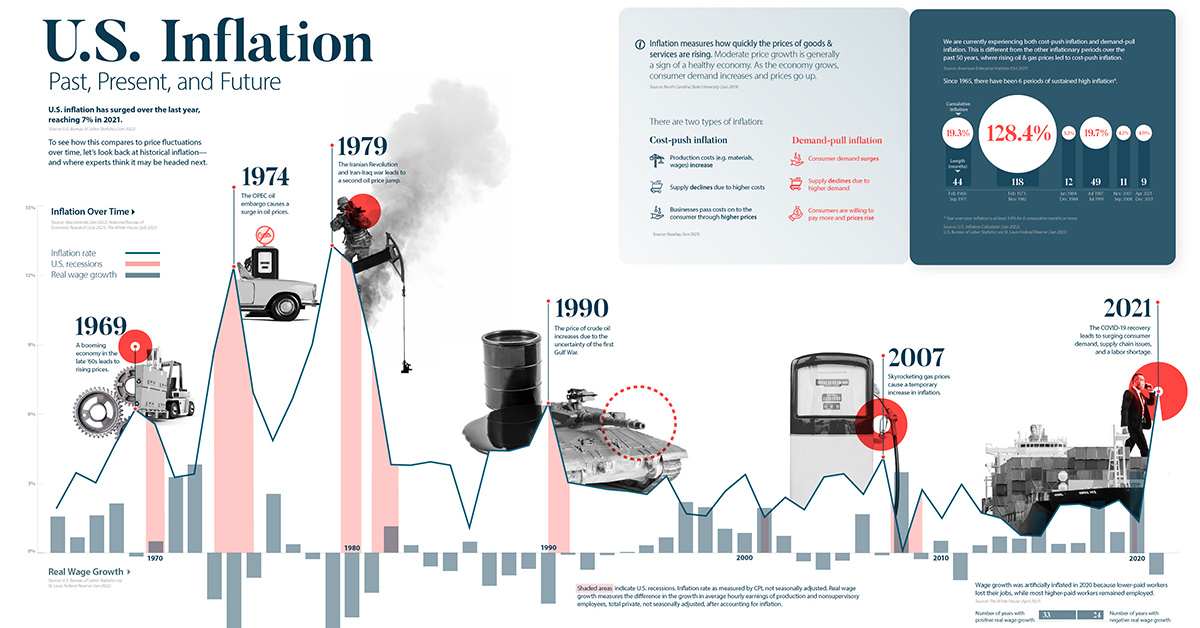 The Inflation Rate in the U.S.: Past, Present, and Future

The inflation rate in the U.S. has surged, reaching 7% year-over-year in December 2021. This marks the highest level in 40 years.

In this graphic from New York Life Investments, we look back at historical inflation—and where experts think it may be headed next.

Before we dive into the data, let’s take a look at what inflation means. Inflation measures how quickly the prices of goods and services are rising. Moderate price growth is generally a sign of a healthy economy. As the economy grows, consumer demand increases and prices go up.

There are two types of inflation.

The History of the Inflation Rate in the U.S.

We measured inflation using data from the Consumer Price Index, which measures the change in price that urban consumers pay for a basket of goods and services. The data shows the year-over-year change from December of the prior year and is not seasonally adjusted.

There are a number of periods in history where the inflation rate in the U.S. was heightened. For instance, a booming economy in the late ‘60s led to rising prices. President Nixon implemented wage-price shocks to halt inflation, but this eventually caused a recession.

In the years that followed, surging oil prices were a primary culprit behind periods of higher inflation. The early ‘70s were impacted by the oil embargo, when OPEC countries stopped oil exports to the United States. At the same time, U.S. oil producers didn’t have additional capacity and non-OPEC oil sources were declining as a proportion of the world oil market. This meant the U.S. was unable to increase supply to meet demand, and OPEC countries had more power to influence oil prices.

Fast forward to 2021, and the COVID-19 recovery has again led to a higher inflation rate in the United States. A number of factors are responsible, including surging consumer demand, supply chain problems, and a labor shortage.

Inflation During a COVID-19 Recovery

To make matters worse, business inventories are at record lows. Retailers can cover just over one month of sales from existing inventories, down 25% compared to February 2020. Not only that, there is a severe labor shortage. Total private job openings increased from 6.2 million in February 2020 to 9.6 million in November 2021.

The lack of supply is leading to higher material and wage costs for businesses, with some categories hit particularly hard. For instance, the price of used cars and trucks has risen over 37% as the semiconductor shortage hampers the production of new vehicles.

Forecasting the Inflation Rate in the U.S.

Over the next few years, various institutions expect the inflation rate in the U.S. to stabilize.

To combat inflation, the Federal Reserve is looking to raise interest rates. This encourages people to spend less and save more. It has also begun tapering asset purchases, which is intended to reduce spending by lowering the amount of money in circulation.

However, for inflation to moderate near the 2% target, issues beyond consumer demand—like supply chain hiccups and labor shortages—will also need to be resolved.

»Do you want to protect your portfolio against inflation? Learn which asset classes have beat inflation in recent years.

The Top Investment Quotes Every Investor Should Know

Europe’s energy crisis could last well into 2023. Here’s how the energy shock is causing ripple effects across the broader economy. 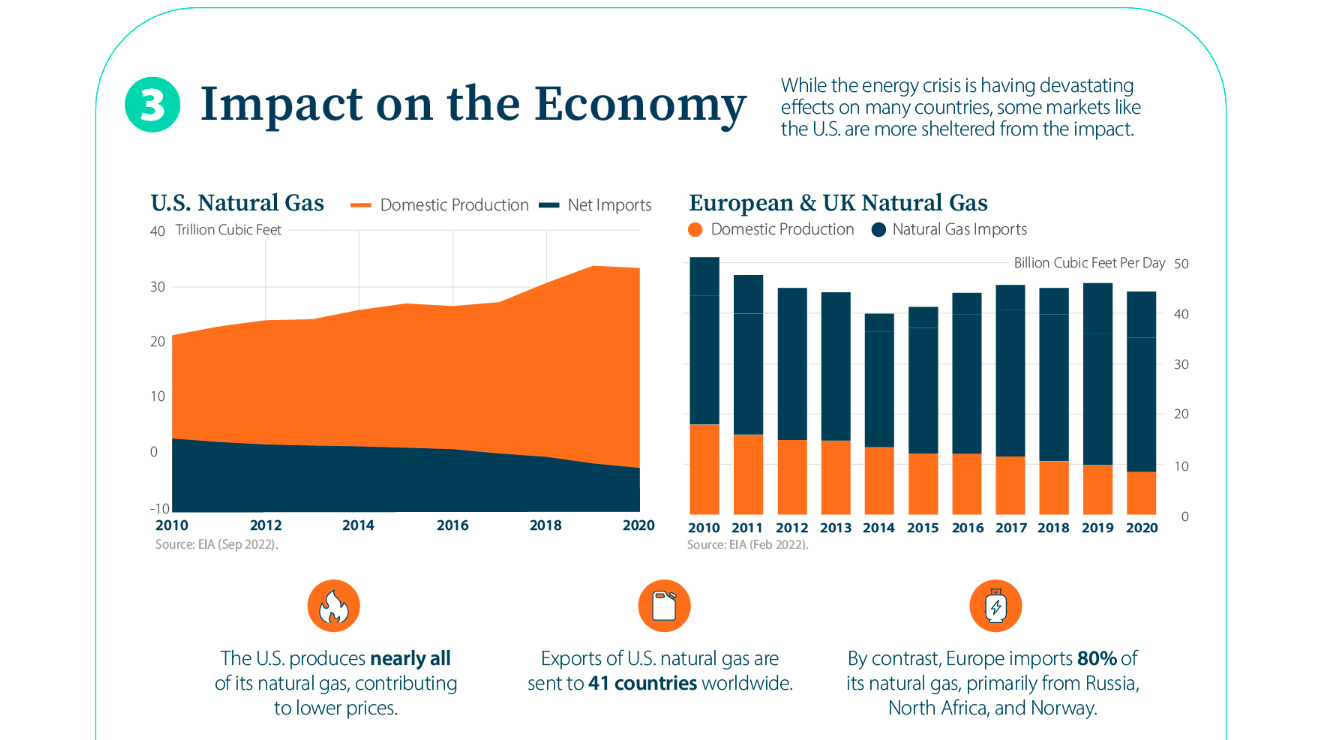 While energy prices have fallen in recent months, several factors could influence price volatility looking ahead:

In the above infographic from New York Life Investments, we show the potential impacts of Europe’s energy crisis on consumers, businesses, and the wider global economy.

Energy plays a central role in overall inflation. Here’s how it factors into the consumption baskets of various countries:

As the above table shows, energy makes up nearly half of consumer price inflation in Germany. In the U.S., it contributes to about one-fifth of overall inflation.

Amid energy supply disruptions, U.S. winter heating costs are projected to rise to the highest level in a decade. As heating costs rise, it could impact consumer spending on discretionary items across the economy, along with other essential household bills.

Natural gas and petroleum are key components in many industries’ energy consumption. As a result, the recent rise in energy prices is adding significant cost pressures to operations.

Below, we show how four primary sectors use energy, by source:

In response, some companies may move production out of Europe to regions with lower energy prices. This occurred in 2010-2014 amid high European energy prices, where companies relocated to the U.S., the Middle East, and North Africa.

3. Impact on the Economy

While the energy crisis is having devastating effects on many countries, some markets like the U.S. are more sheltered from the impact. As seen in the table below, the U.S. produces virtually all of its natural gas. Figures are shown in trillion cubic feet.

By contrast, Europe imports 80% of its natural gas, primarily from Russia, North Africa, and Norway. Not only that, natural gas imports have increased over the last decade, up from 65% of total supplies in 2010.

Meanwhile, the energy sector is seeing strong returns supported by higher oil and natural gas prices, along with key fuel shortages as Russia constricts supplies to Europe. In November the S&P 500 Energy Index was up 65% year-to-date compared to the broader index, with -17% returns.

Given the complex geopolitical environment, Europe’s energy crisis could last well into 2023, driven by many factors:

The good news is that European government relief has reached €674 billion ($690 billion) to cushion the effect on households and businesses.

However, this has additional challenges as increasing money supply may be an inflationary force.

Amid market volatility, investors can avoid getting caught up in short-term market movements and stay focused on their long-term strategic allocation.