The U.S. government is putting a focus on infrastructure investment. For years, the country’s infrastructure—critical structures and facilities like roads, power supplies, and internet access—has been in poor condition.

Now, the government is pledging billions of dollars in funding. In this graphic from New York Life Investments, we explore how this public commitment translates into six potential infrastructure investment opportunities.

Breaking Down the Infrastructure Investment and Jobs Act

The Infrastructure Investment and Jobs Act was signed into law in November 2021. It includes nearly $550 billion in new investments.

Based on these commitments, here are the six categories that present potential infrastructure investment opportunities.

Because infrastructure has been underfunded for some time, transportation systems are in a state of disrepair.

New government funding will enable the expansion and repair of transportation infrastructure.

Millions of Americans don’t have access to broadband (high speed) internet, and the number of people who don’t use it is even higher due to affordability issues.

The infrastructure investment opportunity: Funding could boost the customer base and revenue of internet service providers.

The U.S. has set a goal to have net zero emissions by 2050, yet the country gets most of its energy with fossil fuels.

The infrastructure investment opportunity: Funding could boost the revenue of utility, manufacturing, and renewable energy companies.

U.S. water infrastructure is aging, with 14-18% of potable water lost through leaks. The annual costs of wasting this treated water is projected to increase from $7.6 billion in 2019 to $16.7 billion in 2039.

The infrastructure investment opportunity: Funding could boost the revenue of engineering firms and companies that build, install, and repair water pipes.

Climate disasters and cyber attacks are leading to increased costs & destruction of infrastructure. In 2020, there were 22 U.S. climate disasters that each cost over $1 billion in damage—with a total cost of $100 billion.

New government funding will invest in protection against cyber attacks, floods, droughts, and other climate disasters.

The infrastructure investment opportunity: Funding could boost the revenue of companies involved in cybersecurity, weatherization, environmental consultation, and construction.

Contaminated sites are causing environmental harm or hindering land reuse, and there are more than 450,000 of them across the country. New government funding will clean up contaminated land, reclaim abandoned land mines, and plug orphaned oil and gas wells.

The infrastructure investment opportunity: Funding could boost the revenue and long-term contracts of environmental remediation companies.

A boost in government funding is likely to create increased activity in private infrastructure-related areas:

By paying attention to where the money is going, investors can consider a variety of categories that provide critical services—and capitalize on upcoming trends.

The Inflation Rate in the U.S.: Past, Present, and Future A Visual Guide to Stagflation, Inflation, and Deflation

In this infographic, we show the key differences between stagflation, inflation, and deflation and how they impact the economy and investors. 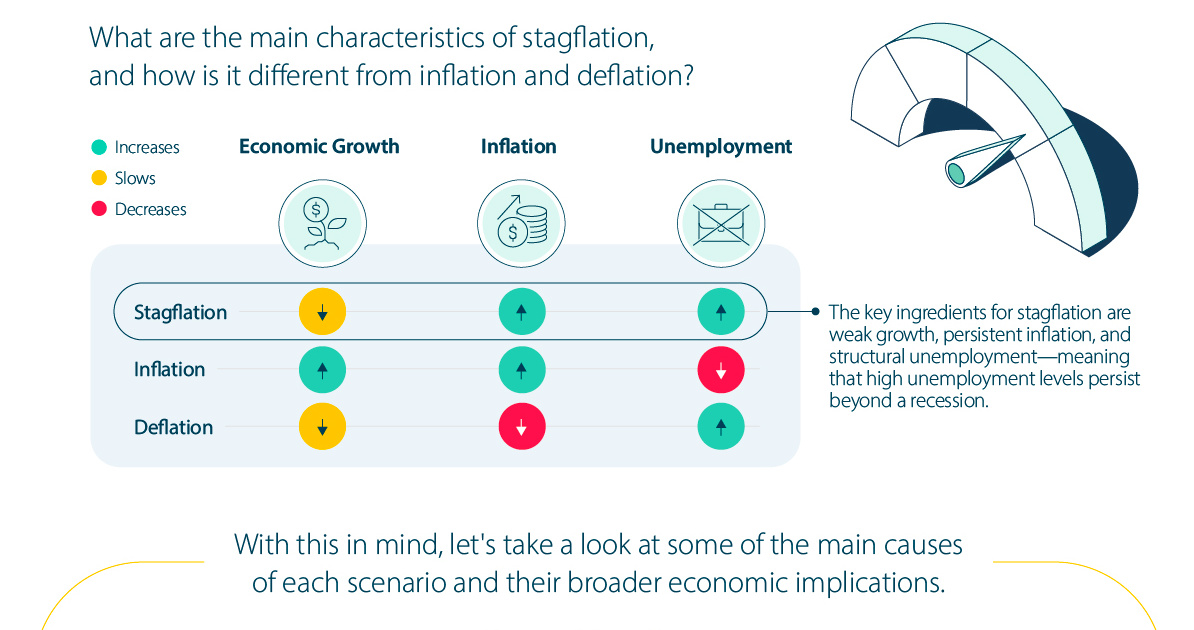 A Visual Guide to Stagflation, Inflation, and Deflation

As of August 2022, the U.S. inflation rate has risen to 8.3%, above the central bank target of 2%. Yet unlike the last period of stagflation in the 1970s, unemployment—a key ingredient for stagflation—remains low.

In this infographic from New York Life Investments, we show the key differences between stagflation, inflation, and deflation along with the broader economic implications of each.

What are the main characteristics of each inflationary scenario?

The key markers of stagflation are weak growth, persistent inflation, and structural unemployment—meaning that high unemployment levels continue beyond a recession.

In a stagflationary scenario, inflation expectations continue to rise each year. This can happen when inflation stays too high for too long, enough for expectations to shift across the economy. This was the case in the U.S. in the 1970s, until the Federal Reserve fought inflation with steep interest rate hikes.

Here’s a closer look at some of the main causes of each scenario and how they’ve historically impacted households and businesses.

The term stagflation is the combination of ‘stagnation’ and ‘inflation’.

The primary causes include the expansion of the money supply feeding into higher inflation, as well as supply shocks, which can drag on economic growth.

During periods of stagflation, consumers spend more on items such as food and clothing, while earning less—reducing their purchasing power. Less purchasing power can eventually cause people to buy less, leading to falling corporate revenues, which can ripple across the economy.

Price pressures, driven by skyrocketing energy prices in the 1970s, contributed to a sharp economic downturn. By 1980, unemployment reached 7.2%.

In response, the Federal Reserve raised interest rates as high as 20% in 1981. Soon after, inflation sank to 5% by 1982 and unemployment levels improved.

Inflation is the rise in the price of goods and services across the economy. Broadly speaking, low and stable inflation is associated with periods of economic growth and low unemployment. It can be driven by rising consumer demand.

The expectation of predictable inflation allows consumers and businesses to prepare for the future, in terms of both their purchases and investments.

Rapid global population growth, the absence of oil shocks, and expanding global trade contributed to falling costs across industries. Between 1990 and 2007, inflation averaged 2.1% compared to 8.0% during the 1970s as price pressures became less volatile.

Deflation is the fall in prices of goods and services in the economy.

In many cases, its main causes are demand shortfalls, reduced output, or an excess of supply. For households, spending may stall as consumers wait for prices to fall. In turn, declining prices may lead to a lag in growth for businesses.

Prior to WWII, deflationary episodes were more common than today. One prime example is the Great Depression of the 1930s, when real GDP fell 30% between 1929 and 1933 and unemployment spiked to 25%.

Tightening monetary policy contributed to this environment. In fact, between 1930 and 1933, the U.S. money supply contracted roughly 30%, while average prices fell by a similar amount.

Which asset classes have historically tended to perform well across different types of inflationary environments?

Defensive assets like gold and commodities have historically performed well during stagflationary periods, with average returns of 22.1% and 15.0%, respectively.

Both U.S. equities and Treasuries have shown the strongest real returns in deflationary or ‘disinflationary’ periods of slowing growth and inflation, at over 8% returns on average each.

While central banks aim to influence price stability and employment through monetary policy, investors can influence their portfolio by adjusting their asset allocation based on where the inflationary environment may be heading.