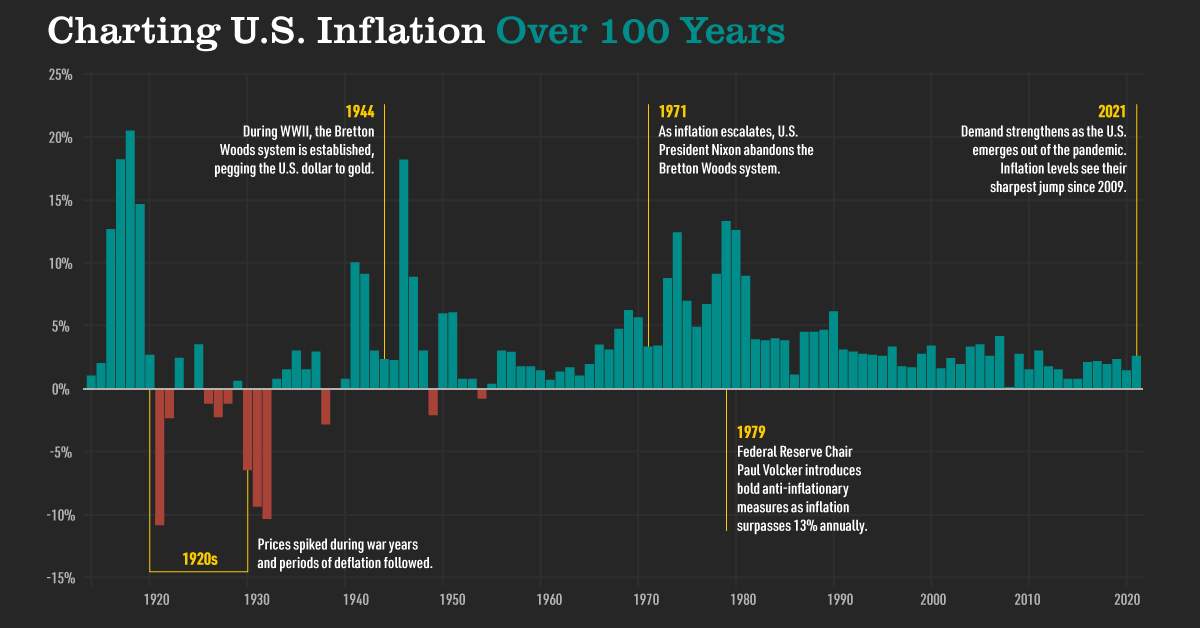 Visualizing the History of U.S. Inflation Over 100 Years

The consumer price index (CPI), an index used as a proxy for inflation in consumer prices, offers some answers. In 2020, inflation dropped to 1.4%, the lowest rate since 2015. By comparison, inflation sits around 2.5% as of June 2021.

For context, recent numbers are just above rates seen in 2019, which were 2.3%. Given how the economic shock of COVID-19 depressed prices, rising price levels make sense. However, other variables, such as a growing money supply and rising raw materials costs, could factor into rising inflation.

To show current price levels in context, this Markets in a Minute chart from New York Life Investments shows the history of inflation over 100 years.

Between the founding of the U.S. in 1776 to the year 1914, one thing was for sure—wartime periods were met with high inflation.

At the time, the U.S. operated under a classical Gold Standard regime, with the dollar’s value tied to gold. During the Civil War and World War I, the U.S. went off the Gold Standard in order to print money and finance the war. When this occurred, it triggered inflationary episodes, with prices rising upwards of 20% in 1918.

However, when the government returned to a modified Gold Standard, deflationary periods followed, leading prices to effectively stabilize, on average, leading up to World War II.

The Move to Bretton Woods

Like post-World War I, the Great Depression of the 1930s coincided with deflationary pressures on prices. Due to the rigidity of the monetary system at the time, countries had difficulty increasing money supply to help boost their economy. Many countries exited the Gold Standard during this time, and by 1933 the U.S. abandoned it completely.

A decade later, with the Bretton Woods Agreement in 1944, global currency exchange values pegged to the dollar, while the dollar was pegged to gold. The U.S. held the majority of gold reserves, and the global reserve currency transitioned from the sterling pound to the dollar.

By 1971, the ability for gold to cover the supply of U.S. dollars in circulation became an increasing concern.

Leading up to this point, a surplus of money supply was created due to military expenses, foreign aid, and others. In response, President Richard Nixon abandoned the Bretton Woods Agreement in 1971 for a floating exchange, known as the “Nixon shock”. Under a floating exchange regime, rates fluctuate based on supply and demand relative to other currencies.

In 1979, Federal Reserve Chair Paul Volcker was sworn in, and he introduced stark changes to combat inflation that differed from previous regimes.

While interest rates jumped to 20% in 1980, by 1983 inflation dropped below 4% as the economy recovered from the recession of 1982, and oil prices rose more moderately. Over the last four decades, inflation levels have remained relatively stable since the measures of the Volcker era were put in place.

Throughout U.S. history. there have been periods of high inflation.

As the chart below illustrates, at least four distinct periods of high inflation have emerged between 1800 and 2010. The GDP deflator measurement shown accounts for the price change of all of an economy’s goods and services, as opposed to the CPI index which is a fixed basket of goods. 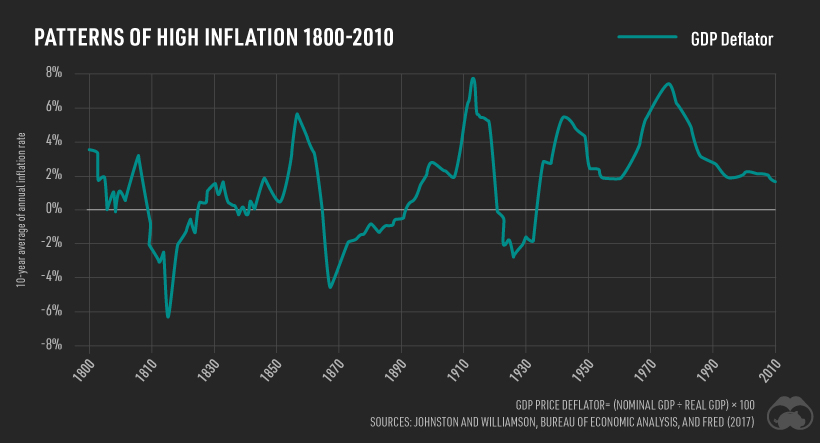 According to this measure, inflation hit its highest levels in the 1910s, averaging nearly 8% annually over the decade. Between 1914 and 1918 money supply doubled to finance war efforts, compared to a 25% increase in GDP during this period.

As the U.S. economy reopens, consumer demand has strengthened.

Meanwhile, supply bottlenecks, from semiconductor chips to lumber, are causing strains on automotive and tech industries. While this points towards increasing inflation, some suggest that it may be temporary, as prices were depressed in 2020.

At the same time, the Federal Reserve is following an “average inflation targeting” regime, which means that if a previous inflation shortfall occurred in the previous year, it would allow for higher inflationary periods to make up for them. As the last decade has been characterized by low inflation and low interest rates, any prolonged period of inflation will likely have pronounced effects on investors and financial markets.

Which Asset Classes Hedge Against Inflation?

Broadly speaking, Fed tapering is the reversal of quantitative easing. We show the history of Federal Reserve bond tapering and how it works. View the high resolution version of this graphic. Buy the poster.

The Federal Reserve began tapering its large-scale asset purchases in November 2021, a move likely influenced by:

More than $4 trillion in capital was injected into the economy through quantitative easing (QE), over the course of the pandemic, inflation is at 40-year highs, and unemployment levels hover below 4%.

As Fed policy responds to a recovering U.S. economy, this Markets in a Minute chart from New York Life Investments shows how Fed tapering works, and its impact on the economy.

Fed tapering is the unwinding of the Federal Reserve’s large-scale asset purchases.

After the 2008 financial crisis, large scale asset purchases were introduced for the first time to inject liquidity into the market and help restore confidence. During the pandemic, they were introduced once more, at a rate of $120 billion per month.

Here’s how it works:

Notably, Fed tapering and QE is hotly debated among economists. Those in favor say QE is a critical tool for stimulating the economy. Those against say that it inflates asset prices and contributes to inequality.

The consumer price index (CPI) rose 7% in December, the highest rise since 1982. Given this increase, Lawrence Summers, former U.S. Treasury Secretary and Jason Furman, former chief economist for President Obama say that the Fed didn’t taper soon enough. Other financial heavyweights suggest this is just the beginning of a hawkish approach to inflation.

So how does Fed tapering impact inflation?

By tapering asset purchases, the amount of money circulating in the economy that can be used to borrow to buy a house or car is reduced. According to this theory, when there is less spending, inflation will gradually cool down.

The Federal Reserve has outlined that it will taper asset purchases before it increases targets on short-term interest rates. By current estimates, interest rates could rise in March.

However, if the pandemic takes a turn for the worse, the Federal Reserve can shift direction. This gives the Fed time to assess how the market and economy will react before it raises rates.

To prevent the taper tantrum of 2013, which led to market volatility and U.S. dollar appreciation, Federal Reserve chair Jerome Powell has stated that the Fed must carefully communicate the sequence of QE and tapering to prevent any fear in the market.

Like the 1940s, the rise in money growth over the pandemic has been driven by government deficits. By contrast, leading up to the 2008 Global Financial Crisis or during the 1950s and 60s, the private sector spurred loan growth.

As CPI and financial markets have soared over the pandemic, investors will be watching closely to see how Fed tapering impacts future monetary policy.

From residential to retail, are there patterns in real estate return on investment? We rank them by sector over the last decade to find out. For the ninth year in a row, Americans say real estate is the best long-term investment.

However, what might be less clear to the average investor are the different types of investments available within the real estate sector, and how they compare. Real estate return on investment within property sectors has historically been uneven, and 2021 was no exception. While residential property soared, office real estate has performed relatively poorly.

Are there any patterns in the top performers over time?

This Markets in a Minute from New York Life Investments ranks real estate return on investment by sector over the last decade.

We used data from the National Association of Real Estate Investment Trusts to show real estate return on investment by year. A real estate investment trust is a company that owns, operates, or finances income-producing real estate.

Here’s how total returns stack up by property sector, sorted from highest to lowest return in 2021.

Data for 2021 is as of November 30. Specialty and data center sectors are excluded as this data was only available from 2015 onwards.

Self Storage real estate was the best performing sector for the last two years, and also performed well during the 2015 market correction. It tends to perform well when people’s lives are disrupted, such as when they’re moving for a new job, schooling, or due to marriage or divorce. In the case of COVID-19, self storage got an extra boost from people wanting more space in their home amid remote work.

Timber and Industrial real estate have been in the top three performing sectors for at least half of the last decade. Industrial real estate, a category including properties that enable the production, storage, and distribution of goods, has seen increased demand due to the rise of e-commerce. One estimate says the U.S. could require an extra billion square feet of warehouse space by 2025.

On the other hand, the Lodging/Resort sector has frequently been one of the bottom performers. A form of discretionary spending, hotel stays may be one of the first expenses people cut when the economy is in a downturn. This weakness was compounded by lockdown restrictions during the COVID-19 pandemic.

What is a Good Return on Investment in Real Estate?

In light of the above data, investors may be wondering which sectors are “the best” to invest in.

The short answer: it depends. Here’s how real estate return on investment has varied within sectors, using the minimum, median, and maximum returns. We’ve sorted the data from the highest to lowest standard deviation, a measure of risk. While Timber and Self Storage have delivered strong returns, they have also been relatively risky, with some of the widest variations in returns.

For investors with a lower risk tolerance, Infrastructure may be a sector to consider. These properties had a positive return on investment for all of the last 10 years, and had the lowest risk of any property sector.

By looking at historical patterns, investors can consider how economic conditions may affect real estate return on investment.

Sectors associated with discretionary spending, such as Retail and Lodging, have tended to perform poorly during downturns. On the other hand, Self Storage and Residential properties have historically been more resilient during the 2015 selloff and the COVID-19 pandemic.

Future trends may also offer food for thought. For example, as the population ages and the government puts an increased focus on critical facilities, could the Healthcare and Infrastructure sectors be poised for growth?

Whichever sector(s) an investor focuses in on, real estate serves as an alternative investment that can help diversify any portfolio.