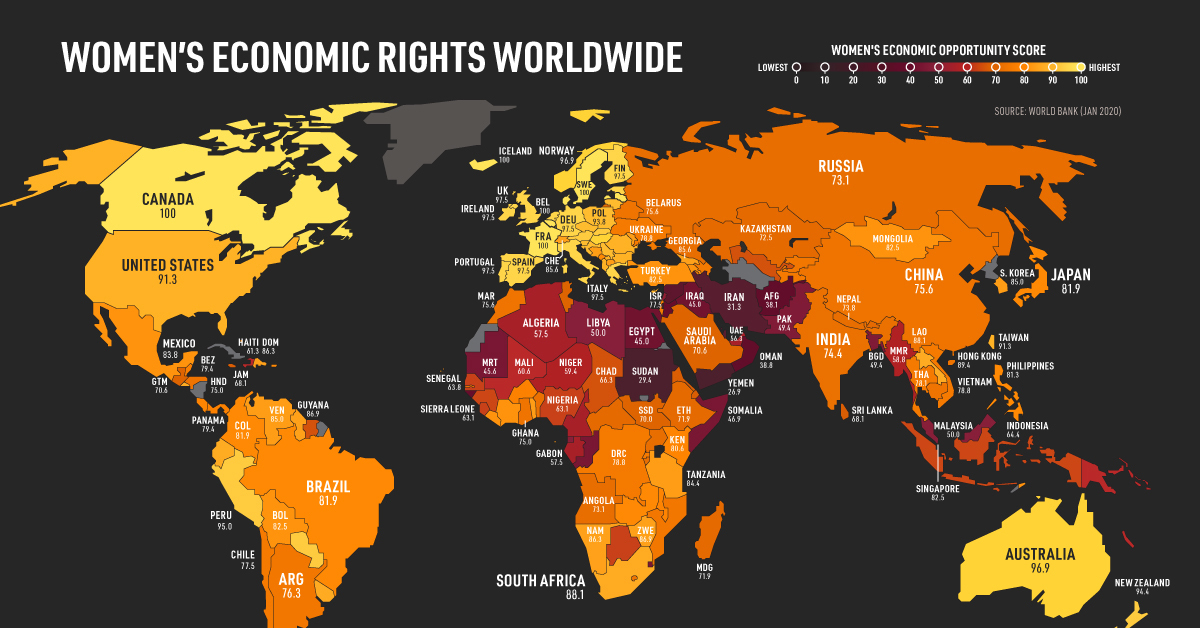 While significant progress has been made over time, women still face entrepreneurship and employment barriers. In fact, on average around the globe, women have just three-quarters of the legal economic rights granted to men.

Equal opportunities are important not only from a human rights perspective, but also from an economic perspective. When women are able to work outside the home and manage money, they are more likely to join the workforce and contribute to economic growth.

In this Markets in a Minute chart from New York Life Investments, we show the state of women’s legal economic rights around the world.

The World Bank analyzed eight metrics that affect women’s economic empowerment at various life stages: mobility, workplace, pay, marriage, parenthood, entrepreneurship, assets, and pension. For example, in places where women are able to move around freely, they are more likely to join the workforce.

To ensure comparability, women are assumed to work in the main business city of their country and in the formal sector. The formal sector refers to work with companies that contribute taxes and/or are registered with the government. It’s also worth noting that the data is based on legal rights, and religious or customary laws are not considered unless codified.

A score of 100 means that women have the same legal economic rights as men for the eight metrics measured. Here’s how each of the 190 economies stack up, sorted by score.

Following the introduction of paid paternity leave, Canada joined seven other countries that have a perfect score of 100. Paid leave for fathers contributes positively to women’s economic opportunity as it allows childcare responsibilities to be distributed more evenly.

At the other end of the spectrum, economies in the Middle East and North Africa had the lowest scores, with women having only half of the economic rights granted to men. However, these regions have also seen their scores improving the most.

For example, Saudi Arabia was the top-improving economy, more than doubling its score from 31.8 in 2017 to 70.6 in 2019. The country exacted reforms that had an impact on six out of the eight metrics. The amendments included allowing women to travel abroad without the approval of a male guardian, and changes that prohibit employment discrimination.

A Force for Good, and Economic Growth

All regions have improved their scores, but most countries still need further legal reform to put women on an equal economic footing with men. Doing so will have important socioeconomic implications. For instance, greater equality of economic opportunity is correlated with a reduction in the wage gap, increasing women’s earning power.

It also has positive economic outcomes. One study published in the Harvard Business Review found that when more women joined the workforce, they helped make cities more productive and increased real wages for both women and men.

As investors pursue geographic areas with economic growth potential, they may want to consider countries that are making the biggest strides for women’s economic rights.

All S&P 500 Sectors and Industries, by Size