When markets take a turn for the worse, dividends often can provide a buffer against the drop.

In today’s Markets in a Minute chart from New York Life Investments, we explore how dividends can help lower risk within investors portfolios when markets enter turbulent territory.

The Appeal of Dividends

Over the last two decades, dividend-paying companies have outperformed the S&P 500 in 12 of 20 years, including in all five years where the S&P 500 finished the year in negative territory.

*Dividend stocks represented by S&P 500 Dividend Aristocrat Index. Past performance is no guarantee of future results.

What sets dividend-paying companies—and especially those that continually grow their dividends—apart from the herd?

While dividend growth signals company strength, it can also indicate that the company has an economic moat—a sustainable competitive advantage. This means two things: the company can raise prices, and keep competitors at bay. For shareholders, this signals a stronger likelihood of profitability, and more sustainable dividend payouts. While capital appreciation is an undisputed factor in building wealth, it’s easy to forget the sheer force of dividends.

A company’s ability to pay steady dividends is critical. Dividends are drawn from a company’s cash balance, which must be sufficient during both strong and lackluster financial conditions.

Ultimately, this cash allocation represents a conservative and disciplined approach to the company balance sheet—demonstrating a commitment to shareholders.

Cushion Against a Shock

When markets turn sour, income from dividend payouts can offer a key lifeline.

The ability for dividend payers to generate superior risk-adjusted returns is demonstrated across their Sharpe ratios, with a higher number indicating a more attractive risk/return profile.

Alongside this, a number of dividend payers have outperformed the S&P 500 in every down year since 2000.

*Dividend stocks represented by S&P 500 Dividend Aristocrat Index. Past performance is no guarantee of future results.

Even during dismal years, dividend payers have shown notable returns.

A Powerful Tool in Today’s Market

As COVID-19 continues to drive further volatility in the market, dividend investing may offer investors both stability and strong income to help weather the storm.

Of course, not all dividend-payers can be expected to be winners. Careful analysis of financial statements and management track records is required to identify companies with the strongest fundamentals.

While dividend payers can help provide a shield in volatile markets, they double as a significant driver of wealth creation over time.

The Psychological Pitfalls of a Market Cycle

This diagram showing the hierarchy of financial needs is a direct spin-off of American psychologist Abraham Maslow’s famous concept. 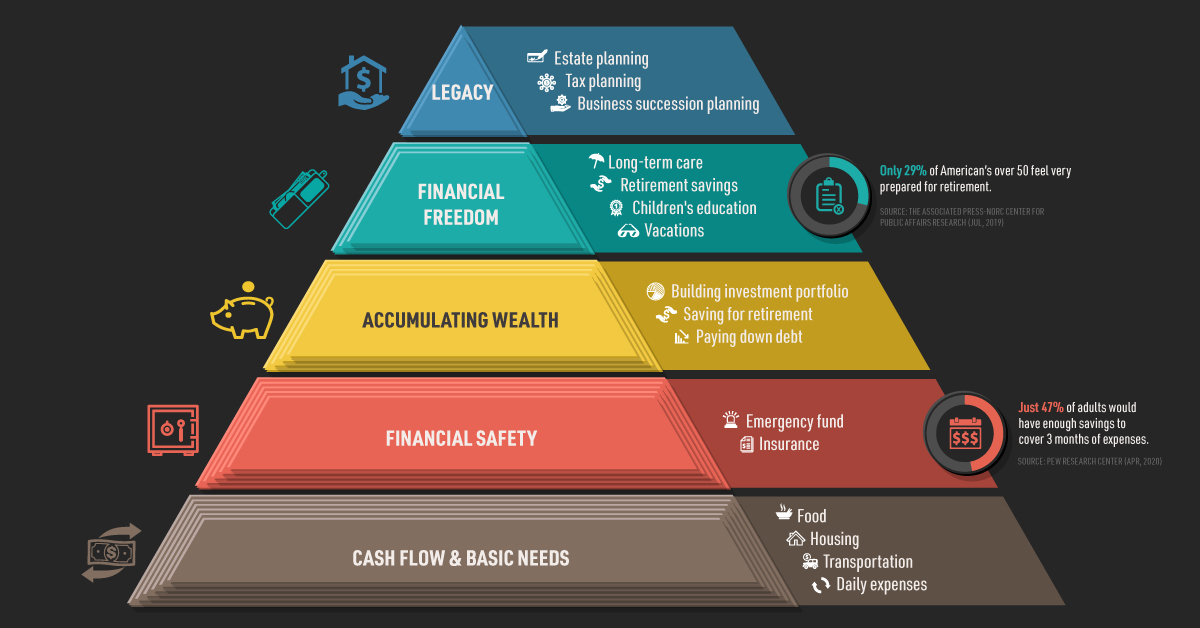 Behavioral scientist Abraham Maslow wrote “A Theory of Human Motivation” in 1943, arguing that humans worldwide are influenced by a “hierarchy of needs”.

This theory organizes human needs across five levels, where needs in the lower end must be satisfied before progressing onto the next level. At one end are physiological needs such as sleep and shelter, while at the other end are esteem and self-actualization.

This Markets in a Minute chart from New York Life Investments explores how Maslow’s theory applies to our financial needs, pinning down the steps to creating a strong financial foundation.

What are the five levels in the hierarchy of financial needs?

Naturally, financial needs can shift based on a given situation. But as a general rule of thumb, moving along this path can help create an enduring roadmap for financial heath.

Financial Needs Under the Microscope

While it’s easy enough to describe the theory in concept, how does the hierarchy of financial needs impact our day-to-day lives in practice?

To start, as individuals live longer, many are concerned with having enough savings for retirement—across all income levels. For Americans in the lower income bracket, 50% worry about their retirement savings, while 26% worry in upper income levels.

Debt is also a primary concern among many Americans, as the cost of both healthcare and education have continued to rise. Average annual college costs, for example, have risen 25% over the last decade, while U.S. household debt has roughly doubled to $14 trillion since 2004.

It’s only once these above needs are taken care of that individuals can focus on the top of the financial needs hierarchy, taking care of legacy-focused items such as estate and tax planning, or business succession planning.

The Importance of Wealth Management

To navigate the hierarchy of financial needs, the importance of having a robust financial plan comes into focus.

Especially during times of uncertainty, individuals need a framework that accounts for changing life circumstances, such as a new job or purchasing a house. And when individuals move up each rung of the financial needs pyramid, they must also recognize how their tactics might need to change to best pursue their financial goals. In times of crisis, risk is thrown under the microscope and former assumptions are reassessed.

From the political climate to the flow of international trade, the impact of COVID-19 has destabilized macroeconomic conditions in many jurisdictions globally.

The above Markets in a Minute chart from New York Life Investments is a macroeconomic risk map of 241 countries and regions as global economies shift.

Data for the risk map comes from Euler Hermes, and it scores macroeconomic risk primarily based on the following categories: political risk, structural business environment, commercial risk, and financing risk.

The political risk category, for example, takes into account the concentration of power in a country. It also assesses the degree of independence of national institutions and social cohesion.

In total, a country’s macroeconomic risk profile is determined, representing the broad risk of non-payment of companies within a country.

Given the sheer weight of the current economic climate, which countries have the highest macroeconomic risk?

Argentina’s soaring inflation is estimated to reach 40.7% in 2020. Coupled with a poorly-timed debt restructuring, its economy is anticipated to shrink 12% over the course of the year. Yet for all its hardship, the country managed to send COVID-19 relief money to its citizens in just three days.

Meanwhile, countries including Venezuela and Bolivia are at steeper risk, compounded by their heavy reliance on commodity exports, such as oil.

As Russia contends with sanctions and counter-sanctions with the West, its political conditions face greater risks. Alongside this, increased involvement in the Syria crisis also factors negatively.

On the other hand, Indonesia’s strong banking system and solid fiscal policies are met with interest rates that fall around 4%. This means that its central bank has leeway to lower interest rates to help spur growth.

As the dust begins to settle, which countries are positioned with the least risk?

How about the U.S.? Backed by the world’s reserve currency, its strengths rest on its diverse GDP and low interest rates. However, the implications of high corporate debt—climbing to $10.2 trillion—weighs significantly, not to mention increasing political fragmentation.

As central banks in wealthy countries press ahead, the end of stimulus packages still seems like a distant prospect. Together, rich nations are projected to borrow a combined 17% of their GDP in this year alone. This, matched with low inflation, is helping to defend economies from collapse.

Still, it raises a key question—is this necessary for a sustainable global recovery ahead?