How closely are money supply and inflation related?

This Markets in a Minute from New York Life Investments shows the trajectory of money supply and inflation, taking a historical look at their relationship since the Industrial Revolution.

To start, here is a brief overview of money supply and inflation:

When more capital is injected into the economy, it can cause consumer demand to grow. Assuming a similar amount of goods and services available, consumers are willing to pay more–which leads to rising prices.

Money Supply and Inflation Over History

Here are the key periods where money supply per capita was the highest in recent history.

Five-year rolling periods were used to eliminate the noise found in one-year periods. As a result, this shows consistent periods of monetary growth, and explains why the recent inflation spike isn’t as pronounced.

As seen in the table below, there were five periods where broad money per capita growth exceeded 50%.

During WWII, the money supply doubled to finance war efforts. Inflation was high during and after this time, particularly in 1946-47, but returned to stability in 1949.

Amid soaring government deficits in the 1970s, inflation climbed upwards. In response the U.S. abandoned the monetary system established in WWII, decoupling from the gold standard, adopting the one we use today.

Today, while money supply per capita has grown 56%, inflation has increased, albeit at a muted rate compared to other periods. In addition, it’s been just two years since the money supply grew at such rapid rates. How inflation will play out in the future remains to be seen.

There are two exceptions where inflation didn’t rise as sharply when the money supply increased.

Between 1875 and 1910, the U.S. emerged as a superpower. During this time, several technological innovations took place including the lightbulb, electrification, and the internal combustion engine. With the Spindletop oilfield advancements in 1901, more oil was produced there in one day than in all global oil fields combined.

As a result, this created real growth and vast improvements in productivity rather than inflation.

The second time period is from the 1990s onwards, with the advent of the internet. As computing power and automation improved, it led to productivity gains and deflationary pressures. As seen in the employment cost index, wage growth decreased amid globalization. Despite influxes of money supply, inflation remained low for decades.

The war in Ukraine has led everything from nickel to wheat and food staples to rise in price. Supply chain disruptions are also fueling higher inflation. Whether or not today’s inflation echoes the price shocks of the 1970s or supply shock of the 1940s (or both) is an open question.

At the same time, the Fed ended its net purchases of Treasuries and mortgage-backed securities in March amid elevated inflation. These emergency measures were used to support the economy during COVID-19. Overall, they totaled $4.6 trillion and the Federal Reserve’s balance sheet doubled over two years.

Going forward, the Fed plans to significantly reduce its balance sheet and raise interest rates. Economists predict inflation will continue to rise in 2022, but long-term forecasts suggest they may fall near the Federal Reserve’s 2% goal.

How Asset Classes Have Performed After Interest Rate Hikes

Is there a correlation between housing prices and inflation? In this graphic, we chart their relationship over three decades. 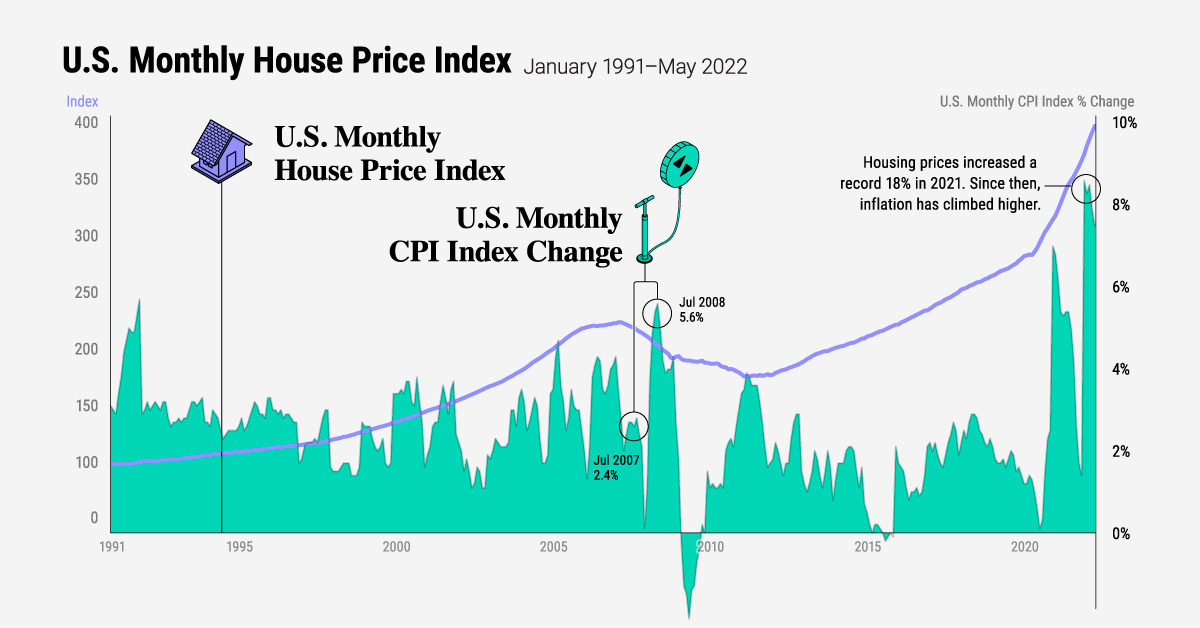 Do housing prices feed into inflation?

Often, rising housing prices lead to higher rents, and rent contributes to inflation. In fact, shelter makes up over 30% of the consumer price index (CPI), a common inflation measure.

Still, the relationship is not 1:1. Historical data has shown a lag between housing prices and the CPI, while other factors—such as input prices and demand—impact their relationship.

This Markets in a Minute from New York Life Investments charts housing prices and inflation over the last 30 years.

Housing Prices and Inflation in Context

In the first quarter of 2022, U.S. housing prices rose at the fastest rate in over three decades—jumping over 18% in the last year.

Not only that, housing price growth has been at a double-digit annualized pace for each of the last six quarters, going back to Q4 2020.

Rising construction input costs have been a key factor. Combined labor and material costs increased 3% in 2019, in the line with the historical average. By 2021, these costs increased 10%, driven by supply-chain disruptions. Low interest rates also boosted demand.

Below we look at the 20 highest annual changes in the price index by quarter since 1992. Data is based on the Federal Housing Finance Agency’s House Price Index.

Since CPI is a cost-of-living index, it serves to track the price of goods and services people consume. That’s why an increase in housing prices, in theory, can impact inflation.

Like the growth in housing price increases, inflation has hit multi-decade highs in 2022. Below, we rank the years with the highest inflation since 1992.

Of course, higher housing prices are not the only factor contributing to higher inflation. Take 1991. Inflation reached 4.2% driven by higher energy costs due to conflicts in the Middle East. During this time, housing prices saw relatively slower growth.

Also consider the 2008 Global Financial Crisis, where inflation hit 3.8%. Housing prices increased at double-digit speed a few years earlier, eventually hitting a peak in 2007. Meanwhile, the price of West Texas Intermediate crude oil soared from $70 a barrel in 2007 to $140 by July 2008, likely having a more immediate affect on inflation.

How will rising housing prices contribute to inflation in the near future?

First, the shelter component of the CPI looks at data from both renter-occupied units and owner-occupied units. As mentioned above, rising housing costs often lead to higher rent inflation.