How can you minimize the impact of a market crash on your portfolio? One main strategy is building a portfolio with asset classes that have low or negative correlation.

Correlation measures how closely the price movement of two asset classes are related. For example, consider asset class A and B.

When investors are building a portfolio, asset classes with negative correlation or no correlation are most desirable. This is because if one asset class drops during a market downturn, the other asset class will either rise or be unaffected.

Stock categories have historically had some level of positive correlation. Here are the correlations for small and large cap stocks, as well as developed and emerging market stocks.

When macroeconomic conditions are strong, the correlation between stock categories tends to be lower as investors focus on individual company prospects. However, when market volatility rises, stocks tend to become more correlated as investors move to safer assets.

This was the case in 1998, when small and large cap stocks reached a peak correlation of 0.97. Russia defaulted on its debt, and a highly-leveraged hedge fund called Long Term Capital Management (LTCM) faced its own defaults as a result. Many banks and pension funds were invested in LTCM, and the Federal Reserve bailed out the fund to avoid a bigger crisis.

For developed and emerging markets, correlation peaked in 2010 when many countries were recovering from the global financial crisis. On the other end of the scale, correlation plummeted to its lowest level in 2017. One reason is that emerging markets became more distinct from one another due to their varying political risk and sector makeup.

In contrast to stock categories, there are some asset class pairings that have provided a low or negative correlation. Here is historical correlation data for U.S. stocks and bonds, as well as gold and the U.S. dollar.

These factors contributed to negative correlation in 1998 during the Asian Financial Crisis. Stock prices flattened due to company trade relationships with Asian economies, while bonds benefited from lower rates and lower inflation. In 2002, high market volatility due to the dotcom bubble resulted in stocks and bonds reaching their most negative correlation.

As investors think about which asset classes to include in their portfolios, it’s important to consider correlation. For instance, stock categories have historically been positively correlated. To diversify, investors may want to consider bonds and alternative assets such as gold.

In addition, macroeconomic events such as financial crises can have an impact on correlation, and investors may want to monitor these changes over time. Finally, considering the risk and return characteristics of various asset classes will allow investors to build a portfolio best suited to their needs.

The Top Sources Americans Use to Make Investment Decisions (2001-2019)

The real price of oil reached a seven year high amid the Russia-Ukraine war. How have other major events impacted historical oil prices? 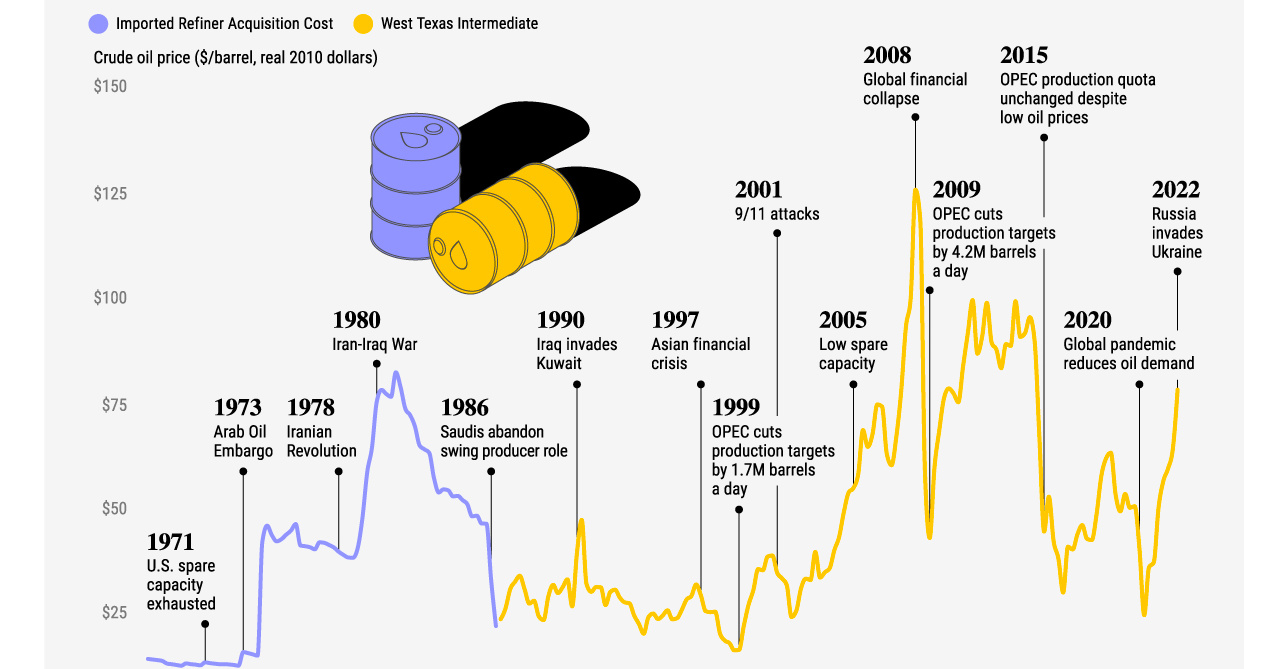 Amid Russia’s invasion of Ukraine, the inflation-adjusted price of oil reached a seven-year high. Russia is one of the world’s largest producers of crude oil, and many countries have announced a ban on Russian oil imports amid the war. This has led to supply uncertainties and, therefore, rising prices.

How does the price increase compare to previous political and economic events? In this Markets in a Minute from New York Life Investments, we look at historical oil prices since 1968.

The Fundamentals Behind Oil Prices

Before diving into the data, it’s worth explaining why historical oil prices have seen so much volatility. This mainly stems from the fact that the supply and demand of oil tends to have a low responsiveness to price changes in the short term.

For these reasons, in order to re-balance supply and demand, it takes a sufficiently large price change to occur. For example, if gas prices were to double, only then may enough commuters consider taking public transit or changing behavior in other ways.

What kind of events can shock the system enough to drive big price changes?

A large portion of the world’s oil is located in regions that are prone to political conflict. Political events can disrupt the actual or perceived supply of oil, and drive prices upwards. On the other hand, an economic downturn reduces energy demand and can depress prices.

Looking Back at Historical Oil Prices

To compare how events have influenced historical oil prices, we used data from the U.S. Energy Information Administration. It should be noted that the data extends to March 31, 2022, and does not reflect the recent price dips in response to Shanghai lockdowns and U.S. rate hikes.

Here is the inflation-adjusted price of a barrel of crude oil during select events.

In 1973, the Organization of the Petroleum Exporting Countries (OPEC) announced an embargo (ban) on oil exports to the United States. The move was in response to the U.S. providing military aid to Israel. By the time the embargo ended in March 1974, the inflation-adjusted price of crude oil had risen 164%. The embargo also led to a selloff in the stock market, with the recovery taking almost six years.

Historical oil prices rose rapidly from 2004-2008. During that time, economic growth was fueling oil demand but there was little spare production capacity. By the second quarter of 2008, inflation-adjusted oil prices hit a high of $125 per barrel. They crashed by 66% shortly thereafter due to the global financial crisis.

Most recently, the COVID-19 pandemic and associated containment measures caused historical oil prices to drop by nearly 40% in three months. Oil prices have since risen 216% from their pandemic low, as of the first quarter of 2022. This is due to the economic recovery and Russia’s invasion of Ukraine.

Oil as an Investment

Investors’ interest in oil as an alternative investment has risen in recent years. Given the high volatility in historical oil prices, investors may want to consider their comfort with this level of risk. Of course, an investor’s sustainability goals may also be a factor when choosing whether to invest in oil.

However, oil also presents opportunities. It has had low-to-negative correlation with U.S. bonds in recent years and may help investors diversify their portfolios. Not only that, it may help investors manage rising interest rates. An economic recovery typically leads to rising interest rates, but also more energy demand. Oil prices have historically climbed during these periods.

For the vast majority of countries, interest rates are marching upward. Here’s how they break down in 2022.