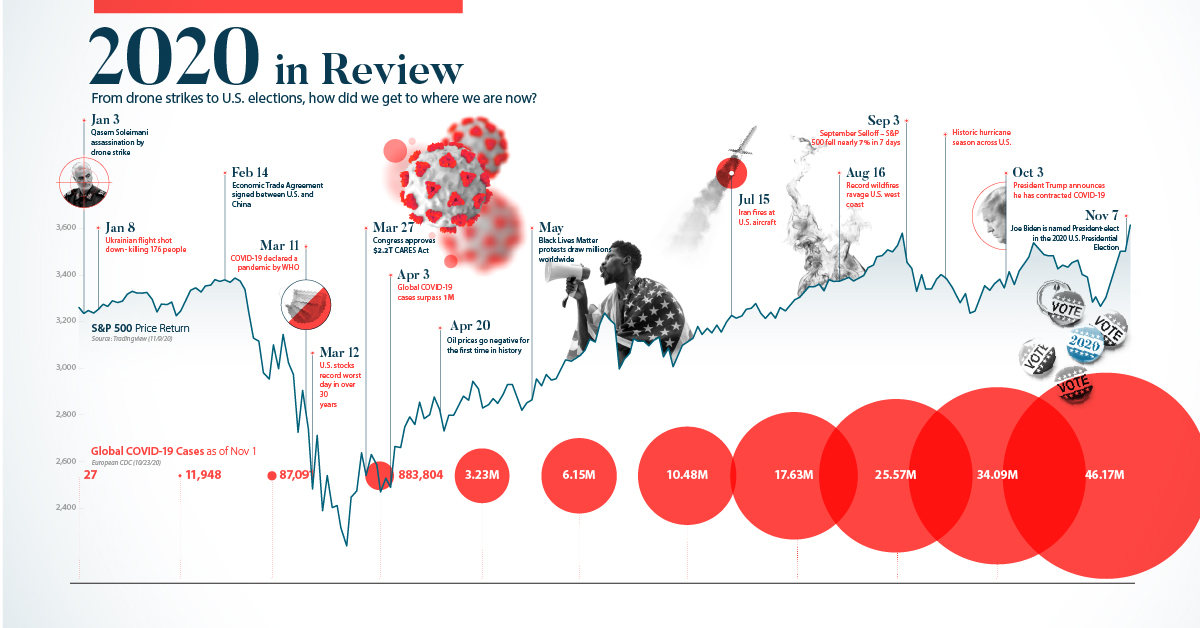 What Lies Ahead? 2021 Global Economic Projections

With over 1.4 million deaths worldwide, COVID-19 has impacted nearly every corner of society.

Yet, hope seems suddenly near. Crucial vaccine developments are emerging, with many of the 320 vaccines in advanced trials. Still, questions remain around the timing and effectiveness of the potential vaccine. With this in mind, the International Monetary Fund (IMF) projects that this year, global real GDP will fall –4.4%, bouncing back 5.2% in 2021.

As we look back on a historic year, this infographic from New York Life Investments traces the notable events of 2020, along with growth forecasts for the year ahead.

From a deadly virus to U.S. elections, how did we get to where we are now?

Since COVID-19 was declared a pandemic, $12 trillion in global fiscal response helped stabilize the economy. Despite financial markets facing their sharpest drop in 30 years, the S&P 500 rebounded in record speed—recovering losses in under four months.

In April, oil prices dropped into negative territory for the first time ever. The combination of both a demand shock and supply shock led oil futures to fall to -$37.63. Since then, oil prices recovered modestly, hovering close to $45 in November.

Finally, on November 16, Moderna announced that its COVID-19 vaccine was 94.5% effective, just days after the 2020 president-elect, Joe Biden was announced.

Despite the number of record-breaking incidents over the year, the tech-dominated S&P 500 held steady. Here is how key economic figures have materialized against the backdrop of 2020:

Government debt rose 20% relative to GDP in advanced economies, while debt has grown at a slower pace in emerging market and low-income countries.

Overall, inflation was lower than pre-pandemic levels, sitting at around 1.5%.

While commodities and medical supplies saw their prices rise, weak global demand for overall goods cancelled out these inflationary effects.

Service sectors were hit among the hardest as social distancing measures were enacted to stave off the pandemic.

In the first half of 2020, accommodation, arts, and entertainment sectors fell close to 15% compared to 2019. Meanwhile, banks were cushioned with cash reserves in the event of unexpected risks, breaking roughly even in year-over-year growth.

While the economy has encountered numerous challenges, the IMF expresses cautious optimism for the year ahead.

Since the IMF’s June projections, economic growth forecasts have somewhat improved. Primarily, optimism is being driven from Q2 GDP growth that exceeded expectations.

Over 2020, China enacted several strict measures to contain COVID-19 early in the outbreak, a key factor behind its economic momentum. Meanwhile, India is projected to rebound 8.8%—higher than any other country in 2021, according to IMF-reported countries.

While several factors remain uncertain, what will pave the way for a global recovery?

Analysis of a Successful Global Recovery

Growth projections are improving, but economic success will hinge on these three layers.

To prevent further unwanted outcomes, it will be essential that policy support is not withdrawn too soon.

The Road to Recovery

With these factors in mind, how could global conditions transform in the months ahead?

In the face of these obstacles, the health of the global economy rests on sufficient consumer demand, capital flows and COVID-19 containment. With news of vaccine developments underway, the outlook is appearing a bit brighter.

Eliminating all harmful GHG emissions is not yet possible, but carbon offsetting offers a route for businesses and funds to become more sustainable. Carbon Offsetting: What Investors Should Know

In 2016, an international treaty known as the Paris Agreement was negotiated by member nations of the UN Framework Convention on Climate Change.

The long-term goal of this agreement is to limit the increase in global temperature to below 3.6°F (2°C) over the next century. Achieving this target will require the world to develop cleaner solutions across all areas of the economy, from energy to transportation.

In this infographic from New York Life Investments, we introduce carbon offsetting, an activity used by both businesses and investment funds that has the potential to accelerate the development of a more climate-friendly economy.

What are GHG Emissions, and Where do They Come From?

Greenhouse gases (GHGs) are a family of gases known to trap heat in the Earth’s atmosphere. The most prevalent among them is carbon dioxide (CO₂), which accounts for 80% of America’s GHG emissions. Common sources of CO₂ include fossil fuel consumption and deforestation.

Businesses are often significant emitters of CO₂, but due to the complexity of their production chains, emissions can be difficult to track. To combat this, a company’s carbon footprint is measured across three scopes:

Although we understand that GHGs are harmful to the planet, our ability to eliminate them is limited by technology and costs. Fortunately, this is where offsetting can help.

How Does Carbon Offsetting Work?

Carbon offsetting is a method of neutralizing one’s emissions by investing in GHG-reducing projects. The benefits of these projects are measured by the amount of CO₂ equivalent (CO₂e) that they avoid or absorb. Then, the company or fund that is engaging in the carbon offsetting project will then receive one carbon credit for every tonne of CO₂e negated.

Below are the three common types of GHG reduction programs.

These projects reduce energy consumption. One example is the distribution of energy-efficient cookstoves in Rwanda, a country where many people rely on firewood and charcoal. By distributing 10,800 cookstoves throughout the country, nearly 60,000 tonnes of CO₂e can be avoided each year.

These projects nurture and protect our CO₂-absorbing forests. One notable example is the Garcia River forest protection program, which ensures the longevity of California’s redwood forests. The program oversees over 9,600 hectares which has been estimated to store almost 80,000 tonnes of CO₂e annually.

These projects reduce our dependency on fossil fuels. They are especially effective in economies such as Taiwan, where 75% of electricity capacity relies on fossil fuels. Thanks to its strong coastal winds, Taiwan is able to remove 328,000 tonnes of CO₂e per year with just 62 wind turbines.

How is Offsetting Regulated?

Carbon offsetting in America is primarily a voluntary activity, but some state governments have made it mandatory for significant polluters. Here’s how both markets are regulated.

The voluntary market is regulated by a variety of third-party organizations such as Verra, Gold Standard, and American Carbon.

They conduct audits on GHG reduction projects to ensure each one meets four broad criteria:

Carbon credits are only issued after a project has passed this verification process.

Some U.S. states have introduced carbon offsetting schemes to meet their climate goals. One of the largest is California’s Cap and Trade program which was introduced in 2013.

The program is targeted at businesses that emit over 25,000 tonnes of CO₂e annually, and works by setting a “cap” on total annual emissions. This cap is reduced each year, and overpolluting businesses must acquire carbon credits to offset their excess pollution. These can be purchased from state-administered auctions or from other firms.

What Role can Investors Play?

A majority of U.S. investors consider themselves to be values-based, meaning they care about the societal and environmental impacts of their investments. This mentality is increasing the demand for ESG investing and placing pressure on corporations to become more sustainable.

For example, the percentage of S&P 500 firms that publish sustainability reports has risen from just 20% in 2011 to 90% in 2019. More importantly, a growing number of U.S. firms are cooperating with the CDP (formerly the Carbon Disclosure Project) to report their emissions and set formal reduction targets.

Some of the world’s largest oil producers are also taking action—a testament to the significance of these shareholder concerns. Royal Dutch Shell announced earlier in 2020 that it intends to fully offset its Scope 1 and 2 emissions.

Carbon offsetting programs such as the one implemented by California have the potential to generate revenues and encourage innovation. Critics, however, have suggested it has a number of design issues.

One such issue is the fact that California’s carbon credits do not expire. This could allow companies to stockpile credits and ignore future cuts to the emissions cap. Another concern is that the companies covered by California’s cap and trade will simply pass their higher costs to the consumer, although this claim didn’t seem to hold up in a 2016 study conducted by UCLA.

Other inefficiencies within the program may exist, but its benefits are hard to ignore. By the end of 2019, the revenue generated from California’s carbon credit auctions totaled $12.5 billion. Of this amount, over $5 billion has been invested in GHG reduction projects to date.

In the first 9 months of 2020, tech’s return was almost 5x greater than the general market’s return. Here’s what you need to know about tech investing. Exploring the Potential of Tech Investing

What should investors know about participating in this trending sector? This graphic from New York Life Investments covers tech’s long-term performance, the broad tech universe, and what investors should consider when analyzing tech investments.

Since most tech companies are internet-based, COVID-19 has caused minimal disruptions to their business operations. In a number of cases, tech companies even saw sales growth as they benefited from consumers going online during lockdown.

Over a longer timeframe, however, tech’s performance is quite varied.

Data based on total returns.

Tech underperformed the general market in 2010, 2012, and 2013. However, the sector has outperformed every year thereafter.

In total, investors who held tech stocks over the last decade would have been rewarded. The 10-year annualized return for the S&P 500 Information Technology index was 20.50%, compared to 13.74% for the S&P 500.

While the information technology sector is commonly used to represent tech stocks, the broader tech universe can be broken down into 4 business types:

In addition, there are other companies that don’t fit neatly into these categories. This includes businesses involved in biotechnology, blockchain, or even retailers with modern technology such as mobile payment systems.

What Investors Should Consider

There are many factors to consider with tech investing.

With all this in mind, how do the sector’s risks measure up against its returns?

Tech stocks have historically been more volatile than defensive sectors, such as utilities and consumer staples. However, they have also generated higher returns relative to their risk level.

By understanding the landscape and what to look for, investors will be poised to take advantage of tech’s potential.